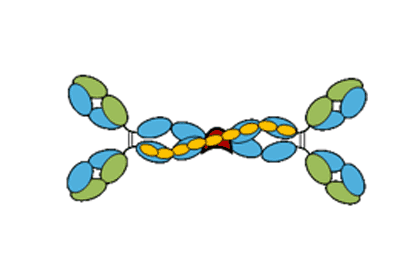 Not applicable to Polyclonal Antibodies

This antibody was purified via Affinity Chromatography

Due to limitted amount of tested species we cannot guarantee that no crossreactivity will occur.

If you buy Antibodies supplied by MBS Polyclonals they should be stored frozen at - 24°C for long term storage and for short term at + 5°C.

The antibody is a rabbit polyclonal antibody raised against FcgR3A conjugated to biotin. It has been selected for its ability to recognize FcgR3A in immunohistochemical staining andwestern blotting. ;This is an antibody designed to detect Fc Fragment Of IgG Low Affinity IIIa Receptor (FcgR3A) ; FcgR3A

Immunoglobulin gamma, IgG, mouse monoclonal H&L chain clones or rabbit, goat polyclonal antibodies have 4 parts. There are 2 heavy chains, 2 light chains. The IgG antibody has 2 antigen binding sites. They represent 70% or more of serum antibodies. This antibody can be antigen purified or protein A or G purified. For storage sodium azide is added or you can call us to request azide free antibody preparations. These will need colder storage temperatures.

The antibody is shipped at +4 degrees Celsius. Upon receving, freeze at -20. For longer periods of time we recommend keeping the vial frozen at -40 or -80. Avoid cycles of freezing and thawing as they may denaturate the polypeptide chains of the antibody. Due to transportation or handling reasons, small amounts of the antibody might get caught on the lid or walls of the vial. We recommend you to briefly cetrifuge the vial prior to use to gather the content on the bottom.